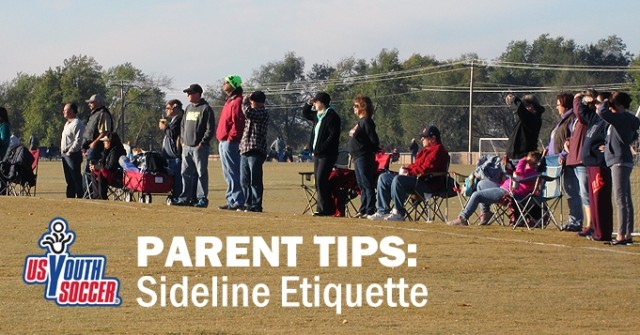 US Youth Soccer spoke to Dave Carton, the director of coaching for Discoveries SC in Rock Hill, S.C.

When playing in a game, youth soccer players’ minds are focused on making split-second decisions as they maneuver around and survey the field.

Every once in a while, however, a player’s attention may be drawn to his or her hyper parent yelling instructions or making a scene from the sideline. While parents’ actions may simply be the result of wanting the best for their child, their behavior can have a negative effect on their young athlete’s enjoyment of the game.

US Youth Soccer spoke to Dave Carton, the director of coaching for Discoveries SC in Rock Hill, S.C., to hear his opinion on some areas in which many parents could improve their sideline etiquette. Carton is no stranger to addressing adults on how to act while at games, and a letter he sent to parents of his club that cited their improper behavior was featured on the US Youth Soccer.

Here are six things to keep in mind when attending your child's game...

1. Avoid ‘coaching’ from the sideline while watching your child’s game

A common problem in youth soccer is the impulse parents have to shout instructions to their young player from the sideline. It’s especially difficult for a child because he or she has a tendency to refer to what a parent says, which often conflicts with the instruction from the coach. Carton said parents should imagine being in a room and having multiple people yelling instructions at them in order to see the confusion it could cause a child.

“Another thing about yelling instructions is that the tone a parent yells with is typically a lot more aggressive than the coach,” Carton said. “The coach is instructing with a teaching mentality. ‘This is what we have to do to improve. This is part of the process to get better and improve your level of play.’

“The instructions that the parents are yelling have an immediacy to it. They want it done now because they want the gratification of the instant result. It’s conflicting with what the coach is trying to do.”

2. Do not criticize the referee

Carton said this is an epidemic, and spectators should realize that referees are people and will make mistakes — even those officiating at the highest levels of play. When parents go after a referee for what they perceive as a mistake, it begins to make the game about the adults rather than the kids.

“A referee is ideally going to make an objective decision on what he or she sees. A parent is going to interpret that same situation through the prism of the team that their child plays on,” Carton said. “If it’s a decision that goes against their team, they’re automatically going to have a subjective view on it.

“The problem comes when there is an aggression to how the parents react to that. The bigger problem is when the child sees that, the child thinks it’s accepted. Parents need to remember they always need to be a model for their child.”

3. Focus on the benefits of the game rather than the score

Far too often parents worry about the numbers formed by illuminated lights on a scoreboard rather than the experience their child has while playing youth sports. Carton said parents are naturally from an older generation in which there was a larger focus on the result of a game. While it’s natural for everyone to want to win, he said parents need to keep focus on the larger picture.

“It’s natural instinct to want to win. The key thing is to keep things in perspective,” Carton said. “If we didn’t win, how can we go into the next game to improve on what we did wrong? Coaches talk about the development process, and losing is part of that process. If your team always wins, their mentality won’t be able to handle setbacks. It’s a big part of a child’s development.”

He went on to talk about a hypothetical 1-0 loss.

4. Think when interacting with opposing fans

“This is one that should be common sense. Grown adults should be able to go and enjoy their child’s experience without having any confrontation,” Carton said. “We get that at our club, too. We always say, ‘Don’t forget, you’re not just representing the club, you’re representing your child. The way you’re acting right now — if you could see yourself through the eyes of your child, what would you think of yourself? Why are you making a public spectacle over a U-11 girl’s soccer game? Are you proud of what you’re doing right now? Would you allow your child to act like this?’”

5. Don’t stress out over the game

Do you find yourself pacing up and down the sideline — anxiously following the action as it unfolds on the field? Stop it. Breathe.

“Just calm down. Enjoy it. Stop being so attached to it. It’s not your game,” Carton said. “Don’t base your enjoyment or happiness on what is going on out there.

“Look at your child. Is he having fun? Is he active? Is he enjoying the social nature of the game? Is he getting as much out of this experience as he can? Don’t worry about the rest of it. Some parents just give themselves aneurysms pacing up and down the line. Keep perspective. There are more important things.”

6. Save issues with the coach for the next day

Maybe you don’t agree with how much your child played in a game or another decision the coach made during the match. It’s important to take some time to think about it rather than confronting the coach in front of your child and the team.

“Directly after the game, the parents should not approach the coach. It’s an emotionally charged conversation and very little good can come from that,” Carton said. “At that time, there’s very little a coach can say that will make the parent feel any better. Go home. Talk to your family. Sleep on it. Get in touch the next day, whether it be by phone, email, or even going for a cup of coffee with the coach and asking for feedback.

“If the coach communicates well enough, the expectation should be there and the parent should understand the situation. If that’s not the case, the parent is totally in his or her right to bridge that communication gap.”